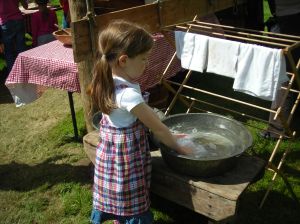 In the greater scheme of history, cookbooks have not always been readily available for the common household, nor have the books (or blogs) with housekeeping advice that is now so plentiful for the modern household.  More often, a girl learned from her mother how to cook and keep house.  Diets were simpler and regional.  If you grew up in Norway for example, you learned from your family and neighbors how to cook Norwegian food.  For those who could write, some recipes were written down, but often learned by heart as well.  The first American cookbook, according to The Pioneer Village Cookbook” by Ann Chandonnet (2010) was called American Cookery, by Amelia Simmons and wasn’t published until 1796.   Here is her recipe for Simmons’ Pompkin Pie,

During the 19th century, cookbooks and books on housekeeping started to come into use more regularly, but were still rare.  Another interesting book in this area is The American Frugal Housewife by Lydia Maria Child first published in 1829.  It contains interesting bits of advice like this:

“Barley Straw is the best for beds; dry corn husks, slit into shreds are far better than straw” (who knew?)

“Keep a course broom for the cellar stairs, wood-shed, yard &c. No good housekeeper allows her carpet broom to be used for such things”  (I remember this one every time I take my good broom outside).   But the volume has all sorts of advice ranging from keeping an immaculate apartment, preparing the cheapest cuts of meat, raising children (play is not encouraged, children should learn to enjoy being productive so that life is more pleasant in the long run), cheap dyes, and of course recipes like this:

“Cider Cake is very good, to be baked in small loaves.  One pound and a half of sugar, quarter of a pound of butter, half a pint of cider, one teaspoon full of pearlash; spice to your taste. Bake until it turns easily in the pans. I should think about half an hour.”  Notice the lack of precision in this recipe.   These sorts of recipes also assume that the cook already has plenty of baking experience.  While these old cookbooks are fun to read some of the recipes are not advisable to try… health codes have changed.

What we would now call a recipe was known pre-20th Century as a “receipt”.  A receipt could even be used to describe any set of how-to instructions including this wonderful excerpt from a fundraising “Kokebok” I found.  This book was pulished by the Ladies of the Sons of Norway Lodge #44 Poulsbo, WA in 1966, but the excerpt is attributed to being much older.

For your enjoyment I will print it in full:

“A “RECEIPT” FOR WASHING CLOTHES BEFORE THE 20TH CENTURY”  provided by Mrs. Paulmer Slind

This is the original spelling.

1. Bild a fire in the back yard to heet kettle of rain water.

2. Set tubs so smoke won’t blow in eyes if wind is pert.

5. Stur flour in cold water to smooth then thin down with biling water.

6. Rub dirty spots on board, then bile – rub cullord but don’t bile –

7. Take white things out of kettle with broom stick handle then rench, blew and starch.

13. Go put on clean dress– smooth hair with side combs–brew cup of tee– set and rest and rock a spell and count blessins.

I so enjoy reading these bits out of the lives of our predecessors.  I can see right into the day of an American family as close and fresh as any American novel, bringing history more fully to life.  They tell a story of love and care, principles and economy, of the joy of a hard earned rest at the end of the day and a slower pace of world.

4 thoughts on “The Joy of Old Time “Receipts””