I have made it clear to my son’s Boy Scout Troop that I would like to outlaw camping between the months of November through April.  I love to hike in the winter, no problem… so long as I am  moving, all is well.  I like camping… in the summer when conditions might turn adverse, but they will more likely be fine.  However, camping in February in the Pacific North West, on the boarder of a rainforest, nearly guarantees foul weather.  So with the proposed February backpacking campout, I had my misgivings, but I diligently checked the weather forecast and lo a window of clear sky from Saturday to Sunday morning…. perfect.

The drive up the peninsula along the Puget Sound was perfect, but as we drew near our destination the snow and rain mix came sporadically which was ominous.  We turned off into the Dosewallips area and came quickly into old snow,  6 inches of old wet snow.

Now if you could see past what promised to be a cold and wet experience, the Dosewallips river was breathtaking; a true mountain river running blue in it’s rapids with great boulders scattered in the midst of it so perfectly like they had been placed there by the mighty hand of God.  The trees were classic rainforest, completely engulfed in mosses and licorice fern and the running water trickling through the forest converging into little riverlets and waterfalls and rushing toward a union with the Dosewallips. 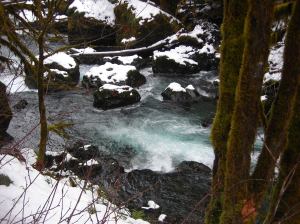 Our intention was to hike up to the Dosewallips campground about 5.5 miles, but conditions on the trail were slow, and some of the boys and maybe an adult or two were struggling at about 1.5 miles.  So we were flexible and went back to the Elkhorn Campground around the 1 mile mark.  At this time I could barely feel my little toes, and I knew that when we stopped walking, I was going to get cold really fast.  We had all dressed in layers and adjusted those layers to keep from overheating.  The worst thing to do is to work up a sweat and then stop in the cold.

Once we reached camp everyone naturally started setting up their tents.  As I looked around I saw 2 methods for setting up in the snow.   Some tents were set up right on top of the snow, others stamped down the snow thoroughly before setting up.   With both methods observed I can attest that stamping down an area is essential.   The snow melts as you lay on it, and for those who put their tents on fluffy snow the ground becomes uneven, causing unevenness in the ground tarp.  This created areas where the melted snow ran in between the ground tarp and the tent which led to wet sleeping bags and very unhappy campers.

The next order of business was fire.  A group of boys were dispatched to dig a latrine while the rest of us gathered firewood…. very saturated wet firewood.   As an interesting side note, one of the adults on our trip was in the Army and had been dropped during his survival training in the wilderness (I’m not sure how long) but the story I heard was that when they dropped him he was given 2 matches, and when they picked him up he still had one left, which he has framed in his home.   So I went with this gentleman to gather dry tinder.  We went to the evergreen trees and looked up.  We couldn’t cut anything of course, but we looked for dead bits and branches that came away easily.  The first cedar we found had all kinds “needles” turned rust colored that we gathered and bundles together tightly.  We also found some dead small branches up underneath the trees that we broke up and bundled.   These tight bundles create greater mass and less air so that they don’t burn up too quickly, and a slower burn will help dry out the wetter wood.  Now the larger logs that we gathered also needed to be cut into small pieces so that they would catch easier.  This fire, in the rain, with wet wood needed plenty of feeding and tending.  We used an army issue plate to fan the fire (save your breath if possible), and diligent gathering and stoking.  Here are the results:

When it’s hypothermia weather, cold and wet, fire is a lifeline.  Once the coals were developed we could dry out the things that had succumbed to the rain and I thawed my little toes.

Which reminds me, my shoes were definitely sub-par.  My hiking boots fell apart right before the trip, and being a busy mom I didn’t have a chance to drive to the city and get a new pair, soooooo I went in my tennis shoes.  I know, not too smart, but I truly did not anticipate snow.  Now, what is that Boy Scout Motto?  Be Prepared?  Oh, ya.  So just because I didn’t anticipate it does not mean I shouldn’t have been prepared for it.  The good news is I had plenty of wool socks and I had a plastic garbage bag.  I cut little booties out of the garbage bag and put those down in my shoes before putting my stocking feet in there.  I also dried my shoes by the fire every chance I had.  So I did just fine but it would have been far better to have a sturdy pair of waterproof hiking boots.   Your feet really are everything when you’re out in the wilderness.

On our Boy Scout outings the boys plan their own meals and cook them.  They make their plan and provide a shopping list for an adult to go pick up.  If it’s not on the list, it isn’t purchased or provided.  I bought my son a hiking cookbook.  It considers weight in the recipes and lists all ingredients and tools needed to create these items.  My son was not present at the planning meeting so he had no idea what he was walking into, however I’m not sure if it would have been any better if he had planned, considering he has never read the cookbook I provided.  You can lead a horse to water but you can’t make him drink.  Three things I noticed about their food… it was heavy, they had no cooking oil, and they did not have the proper tools to cook.  For example, pancakes for breakfast with no surface to cook them on, and no oil or butter to ensure that they did not stick.  They cooked them in a mess kit pot and the cakes would not turn and ended up a goopy mess.  My son said he felt like he had eaten gruel all weekend, but the lesson is that next time he goes on a trip like this he will think about weight, oil and cooking implements.

The adults on the other hand had beef stroganoff for dinner with real steak, and fresh baked cinnamon rolls, pancakes and eggs for breakfast.  The cinnamon rolls were made in a homemade light weight Dutch oven.  Coals went underneath a round pizza like plate, three aluminum legs held a second pizza plate on top.  The center was wrapped in aluminum foil.  Then more coals went on top.  Using this contraption the cinnamon rolls were baked to perfection.  Then the top section was removed and the bottom pizza plate was used to cook the pancakes.  Here are some other great ideas for homemade ovens:  http://usscouts.org/cooking/BackpackDutchOven.pdf

One last note about this trip.  While camping I was reading Little House in the Big Woods by Laura Ingalls Wilder and in the first chapter Laura tells about her father’s method for smoking meat.  His smoker was made out of a hollowed tree with a door in the front and a little roof on top.  He would hang the meat on nails inside the tree, then build a fire out of fresh green hickory wood chips and then close the door and let them smoke for several days never letting the fire die.  On our drive home we saw this by the roadside: